I am an ironing board 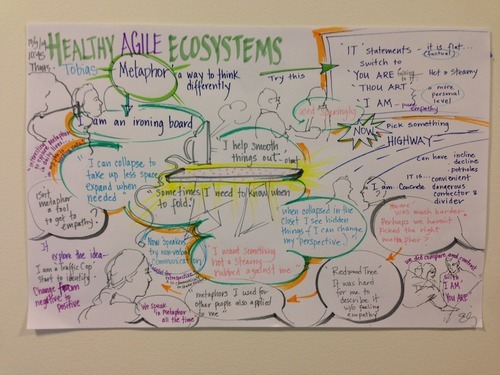 Introduction: (System) metaphor is one of the original XP principles, but has been neglected over time in favor of other, more actionable principles such as test-driven development and continuous integration. A system metaphor creates a shared understanding, and its absence often creates misunderstanding and misalignment. In this session I’m interested in exploring metaphor, not specifically for code, but for human systems,and also individuals. Metaphor can create new understanding, new ways of looking at familiar situations. What might it mean, for example, to say to someone, “you are an ironing board”.

For want of a plan of any kind, I started the session with this question, and asked participants to pair up and explore what it meant to them. Some pairs explored it from a personal perspective, and some from the perspective of their work role, e.g. developer or Agile coach. In sharing we focused on “I” statements, and paraphrasing…

“When I am folded away in a closet I see the world differently to when I am out in the open, being of service.”

“I seek something hot and steamy to be pressed against me.”

“I am the body of workers that supports the change agent (the iron) in removing the wrinkles in my organization (the clothing). Without me there is no foundation for improvement”

A nice corollary for this last one, from the iron’s perspective, was “If I stay too long I will burn a hole, and ruin what I am trying to improve.”

The neat thing about facilitating an open space session, is the sense of release. The session goes where it goes, and all I needed to do was embrace the ideas that emerged, turn them into offers, and suggest some containment for the dialog.

The “I am” statement led a participant to be reminded of an improv exercise called Invocation, where an object is identified of spoken of in four different ways, each one taking the speaker from objectivity to subjectivity: “It is…”, “You are…”, “Thou art…” and “I am…” We practiced this framework in the second part, people finding a new partner and offering an object of their own choice, e.g. bird, flipchart marker, redwood tree, highway… The use of this framework led people to greater empathy. Was that what we were seeking with metaphor? Perhaps. The following discussion looked at the difference between the incremental understanding and the immediate jump to “I am”. The latter is more of an analogy: I am like this thing because… opening up new ways of seeing self, while the former takes the speaker deeper into a place of understanding of the other (thing).

Note: when my partner struggled with the “Thou art” part, I asked him to recite a love sonnet to the flipchart marker he was holding. “Thou art an extension of my imagination…”, he began. I don’t recall the rest but it was very eloquent, and oddly moving. When he tried to do the same in front of the group he wasn’t able to, and afterwards commented how wrong it felt to express intimacy in front of a large group.

We discussed the idea of using another person as the “object”. A traffic cop. 1) It is an authority figure, uniformed, unwelcome. 2) You are a man with a job to do. You need to earn a living like the rest of us. 3) Thou art a keeper of the law, a man with a mission. Thou art possibly a family man, seeking to improve the life of your family in the best way you can. Thou enforces the law because thou believeth in justice.“ 4) I am a man with a mission, a believer in truth and justice. I care for my community and want to help others do the same. This had now moved beyond metaphor into a pure empathy exercise. Time for a retrospective. Are we getting what we want from this session? Where do we want to go now?

I asked for the five most vocal people to form small teams. Their job was to facilitate a dialog and not speak themselves. One of them asked, what, not speak at all? I had rather meant that they did not offer input but made sure all voices were heard, but this was an idea worth exploring. Yes, facilitate in complete silence. Feedback from the facilitators was interesting. In general it improved the ability to listen. The retrospective gave us three topics to explore further, so we created an short open-space-within-open-space.

Time expired, so the small groups dissolved. I asked those remaining at the end to practice with each other during the event, by simply offering a “you are an [object]” challenge to one another at random moments, and see what happened. As I left the reception at the end of the day, I offered a colleague “You are a stuffed mushroom”. I look forward to hearing what he had to say to the others in the group when we next meet.